Actress Kim Hyesoo designated Park Bogum as the next runner, and Bogum completed his mission.

On the official Facebook page of Park Bogum‘s agency, Blossom Entertainment, a video was posted with the comment “Park Bogum participated in the ‘Firefighter GO Challenge.’ We give our wholehearted support to the fire officers!”

In the video, Park Bogum appears dressed in a red striped t-shirt. He is holding a toy fire truck. He says, “Thanks to senior Kim Hyesoo, I have the honor to participate in such a meaningful campaign, the ‘Firefighter GO Challenge,’ to convert firefighters to a national position and improve their labor conditions.

He continued, “I sincerely hope that the firefighters, who keep our lives safe in dangerous situations, can work in a better environment.”

He also encourages the viewers’ participation in the campaign saying, “I ask you for your continued interest and support. I hope everyone who watches this video will join this campaign. You will join us, right?”

Lastly, he pours fire powder on his head with a bright smile on his face.

The ‘Firefighter GO Challenge’ is a campaign to promote the approval of the ‘Wipe the tears of firefighters law’ that calls for an improvement of firefighters’ working conditions. It drew attention as many stars participated as a relay. Actress Han Jimin designated actress Kim Hyesoo. On July 18th, Kim Hyesoo designated Park Bogum saying, “I wish Park Bogum, who is kind and just, would participate in this campaign.” 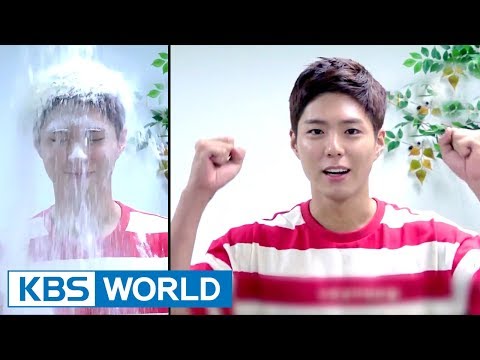